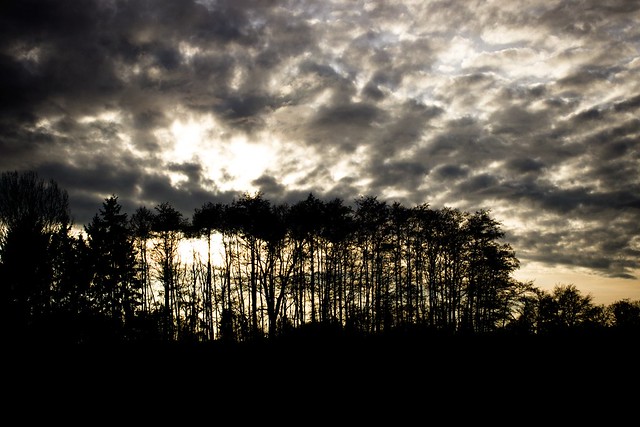 Beyond the ghostly grove of trees, beyond where anybody can easily see, the light dies and darkness spreads its wings. Details are lost from the fore, though oddly the onlookers can tell the finer points of the clouds with ease. These roll and flex, obviously moving but going nowhere. The phenomenon catches the eye of a young boy first, who laughs and points up at the sky, tugging on his mother’s shirt to get her to look as well. He shouts out how silly the clouds are being, and she looks, ready to humor him and brush it off. Thinking that maybe he is seeing an animal shape. Her horror does not rise immediately, though she does not glance away from the clouds as quickly as she had thought she might. She knows instinctively that something is wrong with them, it just takes her mind a few beats to catch up. The hairs on the back of her neck stand long before her thoughts trigger with anything resembling acknowledgement.

She stands staring, as does the boy once he realizes that it isn’t funny what is happening. A man joins them. He’d been walking on the path in the park and thought maybe the pair were watching birds or a skywriter. The crowd gathers faster and faster the more people stop. All of them intent on those clouds, expectant. A Thing is bound to happen, but when? Whatever it is, it certainly isn’t a good Thing. The collective expects doom, though nobody has said a single word aloud. Every one of them is positive that death will come down from that mysterious pulse, that these people will be the last that they ever see. All share thoughts of perhaps saying something to somebody, state their name, say hello, something to connect to the ones sharing the experience and oncoming destruction, yet nobody utters a syllable.

The sun sinks further, the clouds undulate faster, as if eagerly anticipating the falling night. The woman squeezes the hands of the boy she knows and the stranger to the other side of her. She can not tell by touch if the human contact comes from a male or female, old or young, but she is comforted that the hand squeezes back in response.

One star shows them its distant glow, and the clouds pull tightly inward. With them, the crowd inhales and holds that breath.

Bit of an update